Luznor Desarrollos Electrónicos S.L. is an Advanced Manufacturing company from Vitoria created in 1998 by a group of professionals with extensive experience in the field of emergency lighting. The company started its activity with its main product line, emergency lighting, and shortly afterwards also developed its other two specialties, programmable torches for professional use and continuous power supply equipment.

Since 2004, the company has been located in its own 2,700 m2 industrial building (see Image 1) in the Júndiz Industrial Estate (Vitoria-Gasteiz).

All Luznor products are developped entirely in its single production plant using the best quality materials. In fact, one of Luznor's principles is to consolidate ties with local suppliers, ensuring a relationship of trust, a high perceived quality in the products and a transfer from R&D&I to the market as quickly and efficiently as possible. 78% of Luznor' supplies come from Basque suppliers, 70% of which belong to the province of Álava. These supplies refer to materials, services and performances, while 100% of investments are made by Basque companies. 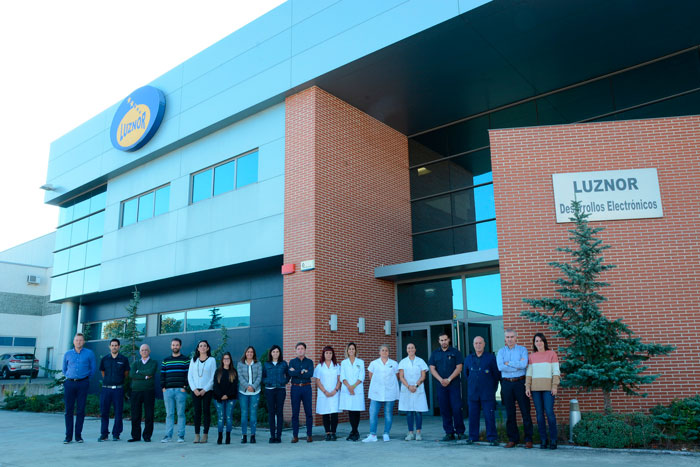 Image 1. Premises and staff of Luznor, in Júndiz (Vitoria-Gasteiz).

The implementation of the ISO 9001:015 Standard is a guarantee of the quality of Luznor's products, as well as the deep-rooted philosophy of commitment to customers, offering a technical service that is highly valued by them. Of course, all products manufactured by Luznor comply with the European Parlement and Council Directives applicable to comply with the CE Marking Directive 93/98/EEC.

The evolution of the company has been very positive, increasing its workforce from 2 people to the current 18 with permanent contracts. At the same time, it is worth mentioning that the employment stability of Luznor is very strong, with an average length of service per employee of 15 years in the company, even though there have been new incorporations in the last 5 years.

In terms of employee qualifications, Luznor has a PhD in Applied Physics, six graduates in various areas of engineering and two technicians specialising in electronic maintenance, which provides the company with the necessary skills for its continuous Research, Development and Innovation activity. With a 20% of the workforce dedicated to R&D&I, which is geared towards progress in achieving energy efficiency and sustainability, Luznor obtained in 2019 the V Green Pact Award for good environmental practices (see Image 2), awarded by the Vitoria-Gasteiz City Council (Luznor has been a Green Supplier since 2012), with the project entitled “Optimisation of torches and reuse of 80,000 chargers through electronic treatment.” 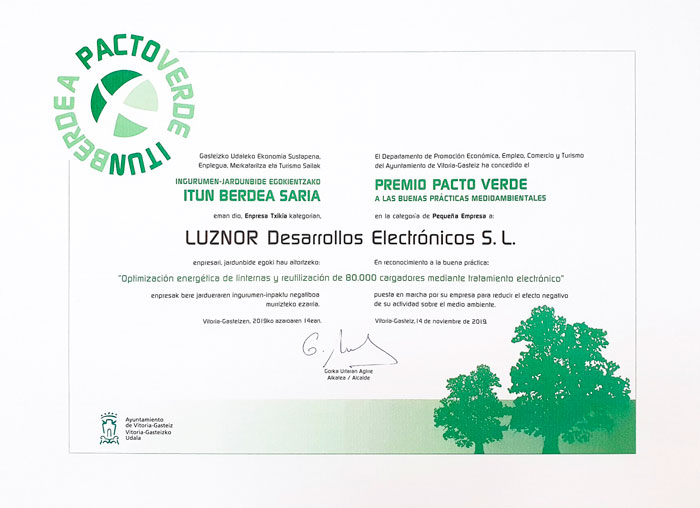 This project, besides playing a driving and exemplary role with regard to responsible consumption practices and reuse, meant the integration of Luznor into the circular economy by achieving an increase in the functionality and useful life of the torches, a reduction in waste generated and its hazardous nature and the reincorporation of electronic and plastic materials into the production cycle through the automatic updating of old chargers.

However, this award, although highly appreciated, is only a recognition of a small part of Luznor's efforts to carry out its industrial activity with total transparency and responsability, in all its possible forms, corporate social and environmental responsability, gender and racial equality, as well as equality of opportunities and salary, RGPD (General Register of Data Protection), and so on.

In this sense, since its creation, Luznor has promoted the integration of women in an industrial work environment, as more than 55% of Luznor's workforce has always been made up of women. For the implementation of measures aimed at gender equality, Luznor was awarded the first ARGILAN “Company and employment in equality” prize in 2006 (see Image 3) by the Vitoria-Gasteiz City Council.

As an Advanced Manufacturing company (one of the Basque Country's priority RIS3) smart specialisation strategies, Luznor has made an important contribution to certain industrial sectors, especially construction, transport and public safety. With the trayectory described above since its foundation, Luznor has reached the highest level of specialisation, positioning itself in a niche market with high added value at international level and promoting the leadership of the Basque Country as a world reference in the sectors of specialisation. 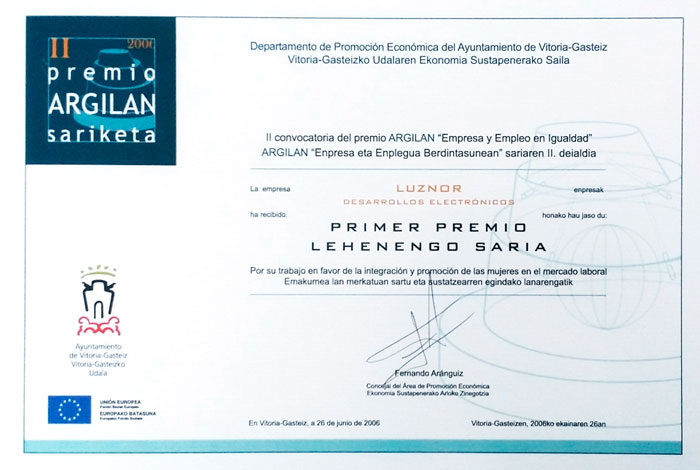 Purpose of processing maintain contact and communication with you and manage online requests made.

Rights: you may, where appropriate, access, rectify, erase, oppose, request data portability, limit the processing, and not be subject to automated decisions only, as detailed in the additional and complete information that you can see in our privacy policy.